Residents of a tower block in Motherwell, Scotland have been forced to leave after asbestos was discovered in the building. 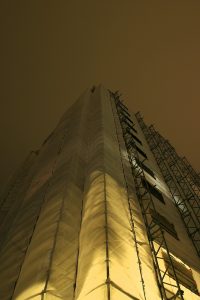 “Initial testing has shown a number of positive results within the building,” the spokesperson stated. “As a precautionary measure, movement to and from the tower was restricted earlier today (July 3). However, in light of the results, we have decided to decant our tenants. While we do not believe there is any immediate risk to health, the well-being of out tenants is our priority.”

Accommodation is currently being arranged for the tower’s tenants and a temporary reception centre has been set up, dailyrecord.co.uk writes. More than 100 people currently live in the building.

Specialist asbestos contractors will be conducting a clean-up operation and the air quality will be tested again to make sure all the asbestos has gone. Once the tests show satisfactory results, the tenants will be allowed to go home.

North Lanarkshire Council adds that its happy with the way its staff members acted on the asbestos scare, praising them for coming out at short notice to help those affected.

If you are concerned about the presence of asbestos in a property, then get in touch with us today by calling 0800 0141 858 to request an asbestos survey.